SITECH Constructions SystemsNewsUncategorisedGetting ahead of the game
October 23, 2017 By SITECH Uncategorised 0 Comments

Getting ahead of the game

Staying ahead of the pack and remaining competitive now and into the future was a big motivator for Marino Excavation’s owner/operator Grant Marino and his decision to adopt Trimble’s Earthworks Grade Control Platform as soon as possible.

So soon, in fact, he is the first to purchase and run an excavator with the platform in Australia. 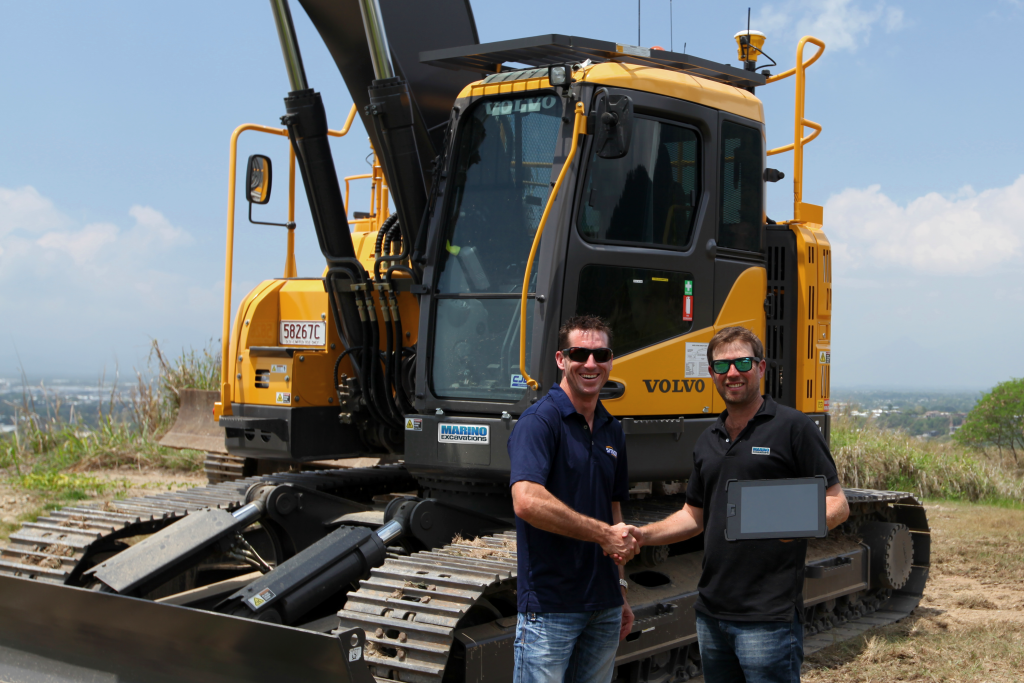 Based in Cairns in Far North Queensland, Marino Excavations has been in business for a decade.

Grant started in quarrying work before branching out and diversifying into civil works.

While he was more than happy with the platform, he felt there was more that could be done with this kind of technology.

Trimble was thinking the same thing … and the Earthworks platform is the result.

“Before I moved into excavation I had worked in film and television – in fact I have a Diploma in Multimedia – and in particular 3D animation,” Grant said.

“I knew technology was moving rapidly and that it could be translated into the kind of work I had moved into … and that Trimble were moving that way.

“I had a good relationship with SITECH’s North Queensland Account Manager, Michael Newcombe, and I was pretty persistent with him about getting my hands on Earthworks as soon as possible.

“I purchased another ECR235CL and wanted Earthworks on board it.”
That happened in September and, while it’s early days, Grant is already impressed with the leap forward in control and features of Earthworks.

“Already I am finding it more user friendly than the previous platform,” he said.

“Because it is an Android platform it is immediately more adaptable. And Trimble plans to release updates about every three months so its going to keep on improving. That’s very appealing for me.

“I can see it will save us time and therefore money in many ways or can pass on the savings if working for a contractor.”

Grant said a number of features of Earthworks had added up to make it the platform he wanted, including:

“The earthmoving industry is a very competitive market therefore focusing on what clients want is essential, which is to get the job done quickly and efficiently,” Grant said.

“That’s why I have chosen to use a leading brand such as Trimble and the latest technology Trimble Earthworks.

“I am eager to see what’s next in grade control systems especially with excavator automation that Trimble Earthworks feature in certain models.”