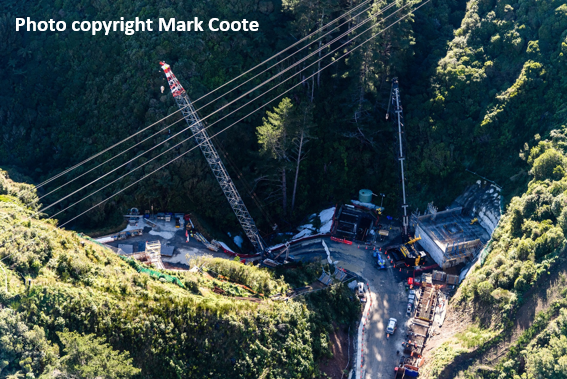 Built to demanding specifications, the design and construction of the Transmission Gully motorway reflects the need for another route between Wellington and the lower and central North Island that will be safer and more reliable for motorists and better able to resist and recover from earthquakes and storms.

The project is highly complex, with difficult and steep terrain requiring large-scale earthworks during construction of the project. Twenty five new structures equating to a total length of more than a kilometer will be constructed along the route. The largest of these, the Cannons Creek Bridge, will stretch 230 meters in length and sit 60 metres above the valley floor.

The $850 million Transmission Gully motorway is being delivered as a Public Private Partnership (PPP) by Wellington Gateway Partnership in partnership with the New Zealand government.  A key part of the Wellington Northern Corridor, the project is one of the most significant single pieces of new road construction in the lower North Island.

A key component of the Transmission Gully project is the construction of the 230 meter-long Bridge over Cannons Creek, the largest structure to be built for the project. Sitting 60 meters above the creek, the finished bridge will be four lanes wide, 230 meters long and 24.5 meters wide when complete. A total of 44 steel girders, each 1.8m wide and 3m deep, make up the framework of the bridge deck which is supported by two abutments and two piers. Over 10,000 cubic meters of concrete will be used to build the bridge and all of its components.

The roadway and bridge are located below a number of high voltage power lines, which limits the use of conventional building methods that require tall pieces of equipment. Therefore, the contractor selected an innovative incremental ‘launching’ method to install bridge girder assemblies over the open space between the piers. The girders, precast panels and frames are assembled in the launch yard and then moved onto rockers that move the assemblies onto the piers. The entire process is supported by several cranes located in the launch yard, and in close proximity to multiple high voltage power lines. Per regulations, contractors are required to stay outside a 10-meter exclusion zone during normal lifts and six meters during critical lifts.

To keep the team safe under high voltage transmission power lines, particularly during construction of the pier heads and bridge assemblies, CPB HEB JVneeded an innovative solution to manage some critical crane lifts and day to day servicing of the piers.

“We thought we might use a spotter on the ground but that wasn’t going to give us the assured reliability, particularly in the high winds that are common in Wellington,” said the JV’s survey manager. “We needed a way to relay immediate information to the crane operator, such as an alert, during critical crane lifts and day-to-day servicing of the piers. There was no off-the-shelf solution that we could find. But we also needed something affordable.”

To ensure the safety of workers and the public, CPB HEB JV worked with Transpower New Zealand to develop a 3D model of the power lines and the “safety envelope” – the safe operating distance – around the overhead transmission lines near the Cannon Creek bridge project.

The model simulated the sway or sag movement of the power lines in varying wind and temperature conditions. As well, the crane company provided a 3D model of the crane that included movement of the main boom length, fixed fly jib and offset angle, back stay ropes and any other elements that could potentially contact the overhead lines.

“Once all the essential elements were modeled, we were able to define a theoretical exclusion zone based on the most extreme conditions of the overhead power lines, as well as the crane’s maximum boom height above the cab, which is approximately 70 meters,” said CPB HEB JV’s survey  manager. “With that model and the associated algorithm, we had a real-time solution to drop into the crane cab for the operator to use.”

Initially, one crawler crane was equipped with dual mast GPS receivers, one on the back of the crane cab and one on the top, with sensors added to the main boom.

Inside the cab, an onboard touch screen equipped with the latest Trimble Marine Construction Software provides the operator with a 3D view of the crane boom as it moves in space and its virtual proximity to the closest powerline exclusion zone. The algorithms in the program continually adjust the 3D visualization by using real-time kinematic (RTK) GPS, mapping the position and orientation of the crane’s main boom, fixed jib and main body to within approximately 30mm accuracy.

Before the critical lifts, the project’s survey team carried out onsite testing to confirm the coordinates of the GPS antenna on the boom tip of the crane matched the coordinates measured by the surveyor. This confirmation gave the construction team and power company confidence that the new system was operational and accurate.

Further, a two-step visual and audible alarm system was installed to alert the operator to proximity of the boom to the lines.  The in-built custom alarms available in the Trimble Marine Construction (TMC) software were configured to provide progressive alerts based on the closest distance of any part of the crane to the exclusion zone. At 10m the operator gets a visual alarm on the screen in the cab, at 8m the border of the operator screen flashes yellow and the audio/visual alarm (external flashing light and siren mounted on the roof of the cab) is activated.

“We did a lot of field testing to verify the alarm operations and to check issues related to losing satellite lock, particularly at the bottom of the gully,” added the project’s survey manager. “But we never had a problem and the alarm system worked extraordinarily well.”

On Time and Award Winning

When asked how they measure success,CPB HEB JV is quick to say finding and deploying the GPS-enabled in-cab crane positioning solution was a big win for safety, productivity and community relations. He adds, “Without this solution, we were going to have to shut down power lines – a massive negotiated effort that could have delayed the project and disrupted the community. As it was, we had no delay to the project due to powerline movement.”

Work on the Cannons Creek bridge began in 2018 and will be complete in early 2020. Completion of the Transmission Gully project is on track and scheduled for 2020.

Earlier this year, the Transmission Gully Project team won the 2019 3M Award for best use of design/technology at Workplace New Zealand's 2019 Health and Safety awards for its GPS-enabled crane location solution.